When a doctor advised him to stop running, Richard Fisher had other ideas – and took part in an Ironman triathlon.

The Ironman – a 2.4-mile swim and 112-mile bike ride followed by a 26.2-mile marathon run – is one of the toughest one-day events in the world of sport. And that’s without serious knee injuries to consider.

But Richard, a non-executive director of Ferndown-based asset management firm Zestec, wanted to test himself one last time and, with just a few weeks’ training, successfully completed the gruelling Tenby race – his fourth Ironman.

Explaining what first inspired him, Richard said: “I retired from rugby and needed to do something else active, and a friend persuaded me to try triathlons with my second one being an Ironman.”

That first Ironman was in 2010, and he competed in Ironman events for the next two years. But for the following four years fate conspired to keep Richard out of competing – injuries, commitments and even a cancellation on the start line at Lake Tahoe due to forest fires.

Last year ongoing problems with Richard’s knees led his doctor to tell him he shouldn’t run again. But, says Richard, “I just wanted to do one more.”

A last-minute decision to enter the Wales Ironman in Tenby allowed just six weeks of training.

Richard said: “I told myself if I could get off the bike I could do the run, but my back seized up at the end of the bike race and for the entire run it was hurting. But there are always people racing who are in far worse situations than me – you just have to keep going. I was worrying about my knees but in the end the pain in my back kept my mind off them.”

“For several years I competed to raise money for charity but this last one was just a personal challenge, coming out of retirement and seeing if I could complete one more.

“I’m definitely tempted to do it again, but I have promised my wife I won’t.” 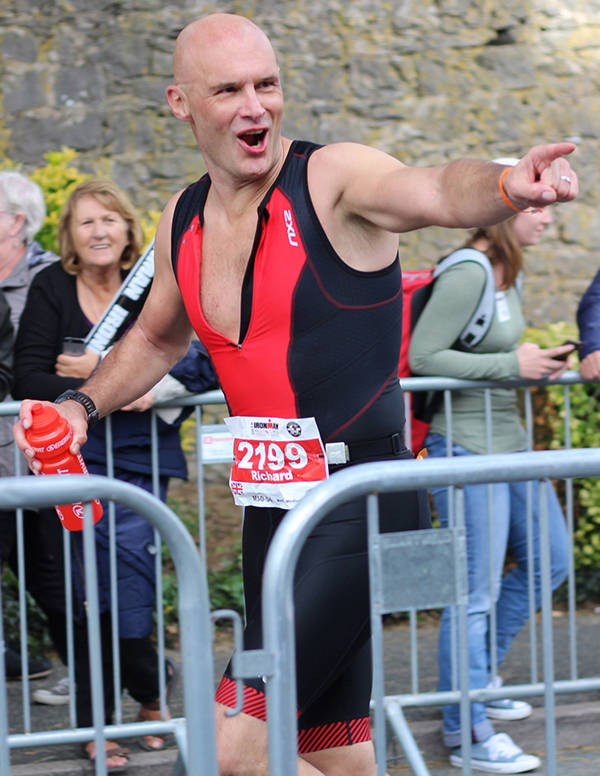 Richard’s biggest cheerleaders are his wife, Rachel, and daughters Hannah, 18, and 14-year-old Danielle. Richard said: “The girls are the most amazing supporters. In any crowd I just have to listen for Hannah and I know where they are!”

When Richard competed in New York in 2012 Rachel and the girls were there cheering him on. And the three of them were there again in Tenby – complete with specially printed t-shirts.

Richard’s colleagues at Zestec were also suitably impressed with his amazing efforts. Managing Director Simon Booth said: “Quite why anyone would want to put themselves through a challenge like this, and after only a very limited period of training, I have no idea – but Richard did! It’s a pretty impressive achievement.”

This is a milestone year for Richard as he turns 50 in November. And even if there aren’t any more Ironman contests on the horizon, he still has the kind of active lifestyle that makes most people exhausted just to hear about it.

Four mornings a week he takes his dog out running at 5am. Then there are the days he drives to Boscombe, swims from Boscombe to Bournemouth pier and back again before running from Boscombe to Sandbanks and back. Then it’s a quick shower on the beach – and he’s ready to get to the office for 9am.

But it looks like Rachel will have just as much to worry about next year, because Richard’s 50th birthday present is a two-week cycling trip to the Himalayas, which involves being on a bike for five or six hours a day and includes two days where Richard and his friends will be carrying their bikes.

And the lure of the Ironman contest is always present. Richard said: “I had a great time in Tenby – and I reckon I could do just one more…”

Building owners, solar installers and investors can find out more about working with Zestec at www.zestecgroup.co.uk

This website uses cookies to improve your experience while you navigate through the website. Out of these, the cookies that are categorized as necessary are stored on your browser as they are essential for the working of basic functionalities of the website. We also use third-party cookies that help us analyze and understand how you use this website. These cookies will be stored in your browser only with your consent. You also have the option to opt-out of these cookies. But opting out of some of these cookies may affect your browsing experience.
Necessary Always Enabled
Necessary cookies are absolutely essential for the website to function properly. These cookies ensure basic functionalities and security features of the website, anonymously.
Functional
Functional cookies help to perform certain functionalities like sharing the content of the website on social media platforms, collect feedbacks, and other third-party features.
Performance
Performance cookies are used to understand and analyze the key performance indexes of the website which helps in delivering a better user experience for the visitors.
Analytics
Analytical cookies are used to understand how visitors interact with the website. These cookies help provide information on metrics the number of visitors, bounce rate, traffic source, etc.
Advertisement
Advertisement cookies are used to provide visitors with relevant ads and marketing campaigns. These cookies track visitors across websites and collect information to provide customized ads.
Others
Other uncategorized cookies are those that are being analyzed and have not been classified into a category as yet.
SAVE & ACCEPT
Go to Top